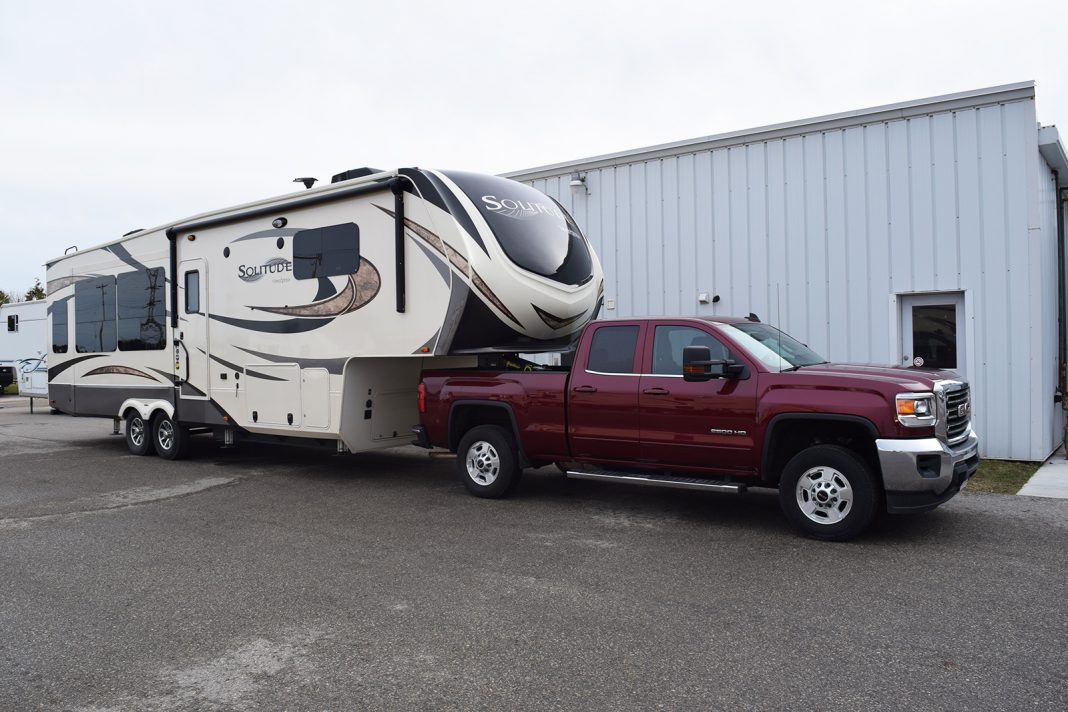 This Solitude is a nice full profile fifth wheel, one of the few still under 35’ in actual overall length. Empty weight is 12,140 pounds with a pin weight of 2,360 pounds. The 6.0 litre GM gas engine tows it easily but likes its fuel.

In our fleet of RV tow vehicles, we always have a heavy-duty pickup for towing large fifth wheels. Over the years, we have had a wide variety of these HD trucks. In the ‘90s we bought new trucks just about every year as there always seemed to be something new to try out. We had all the large gas engines – the 454 GMs, the Ford V10s, the Dodge V8s, and the diesels, like the 6.5 litre GM diesels and an early Duramax. Since 2003, however, we have tended to keep our trucks for longer periods. It started in 2003 when we sold our Duramax to a client who was buying a new fifth wheel, but at the time there were no diesels for sale other than some models that were loaded with more expensive options than we needed.

We happened to come across a 2003 6.0 litre gasoline fuelled GM 2-wheel drive pickup. It was just over half the price of the diesels available at the time. It turned out to be a great truck – the fuel economy was not far off the efficiency of the diesel, and it was noticeably quieter and more responsive as a solo vehicle, partially due to only weighing 5800 pounds and sitting quite low by today’s standards. We wound up towing with this GMC truck until 2008. Our ownership cost on this truck was very reasonable, so in 2008 we replaced it with a 2008 Dodge with the 5.7 Hemi, which had more power than the 6.0 GMC and came with a 5-speed transmission. We put 230,000 Kilometers on this truck… I personally delivered two Mobile Suite fifth wheels to Florida with it. Again, it was very reliable, with a very reasonable cost of ownership. It only cost $38,000 new, and we ultimately sold it for $14,000 after 7 years of use, and it never needed any repairs aside from normal maintenance.

I would have replaced this truck with another RAM Hemi in a heartbeat, however the RAM engineers took away the independent front suspension on their two-wheel drive trucks, and gave them the same live axle front suspension as the 4×4. It was too bad, because with the independent front end this was a great riding and handling truck, but I suppose that so many of their sales were 4×4’s it was not worth it to keep building a heavy duty independent system.

In 2015 we ordered a GMC with a double cab, this gives the truck 4 doors, but a shorter rear seat area for better maneuverability. It has a 144” wheelbase vs the 153” wheelbase of a full crew cab. This truck has the SLE trim package, which is quite nice, and with every option you could ever need, but no leather or navigation system. It was $44,780 including 2% financing for 5 years, so the real cost of the truck was less than 40K. The diesel model was not offered with the interest rate deal at the time, and with the added cost of the diesel option it did not come close to making financial sense. In 2015 the Duramax was producing 765 pounds of torque, which is nice, but there is something to be said when you are buying a truck for others to drive – you really don’t want it to have enough power to hurt itself.

As a side note, the truck that almost makes the most sense is the Nissan Titan, with a 5.0 Cummins engine that has 555 Pounds of torque and 310 horsepower, which is plenty for towing RV’s. The truck is a three-quarter ton in every respect except the rear axle capacity. If Nissan put in a 6500 pound rear axle I would own one. As it is, it is in a weird middle space – too expensive and powerful for half-ton duties, and too low a rear axle capacity for a heavy duty.

The 2015 GMC has been somewhat disappointing. Fuel economy is not as good as the 2003 despite having a 6-speed transmission, and it certainly does not handle as well. The 2003 GM and 2008 Dodge were quite responsive, especially the Hemi, which felt almost nimble for a large truck. By comparison, the 2015 GMC feels a little top heavy and vague, likely due to being 800 pounds heavier and considerably taller. Otherwise, it is a pretty quiet ride, and other than the ridiculous climb to get in and out, it is an easy interior to live with.

We are now looking at a very similar decision to what our customers face every time they think about trading in or trading up their tow vehicle.

A customer recently traded in a like-new 2007 Chevrolet crew cab 4×4 diesel pickup with only 60,000 kilometers on it. This version of the Duramax has 650 pounds of torque and 365 horsepower. It is a much simpler motor than the current versions, and 650 is plenty of torque. In first gear, it generates 5567 pounds of forward thrust – compared to our 2015 gas model that produces 4650 pounds. With the Grand Design Solitude fifth wheel shown here, loaded for travel, the diesel-powered tow vehicle has 4 pounds of weight to move for every pound of thrust, and the gas pickup has only 4.7 pounds to move per pound of thrust, so both have plenty of torque to get the weight moving, and the horsepower is almost identical.

The financial equation is a little less obvious, because the two trucks are worth almost the same amount, although the 2015 has 45,000 Kilometers on the clock.

First, we did some back-to-back fuel economy testing to see how much fuel efficiency difference there really was between the two trucks. Towing the Solitude fifth wheel at 100 KPH the gas powered truck turned in 7.9 miles per U.S. gallon, or 29.7 L/100 km. It surprised me to see how low that was – in 2004, I took a 33’ Hitchhiker fifth wheel to South Carolina on vacation, towing it with our 2003 6.0-litre truck, and I averaged 9 MPG (U.S.). The Hitchhiker had a more aerodynamic rear cap and lower rolling resistance tires, but it was 6” wider than the Solitude that I was comparing it to. The diesel turned in 9.8 MPG (U.S.) or 24 L/100 km. Two miles per gallon may not sound like much, but at this level it is a 24% increase in consumption. Driving solo, the difference is similar: the gas pickup at 110 KPH delivers only 14.8 Miles per U.S. gallon or 16.5 L/100 km. The diesel pickup, driving at the same speed – even with the four-wheel drive, logged 18.8 MPG (U.S.) or 12.5 L/100 – a difference of 30%. One advantage that the gas truck normally has, is that it is lighter to get moving in city driving due to less weight – but the 2007 diesel only weighs 460 pounds more than the 2015 gas, so I would imagine the difference here is still in the 25-30% range.

If we keep the truck for 150,000 kilometers and assume that we tow for 2/3rds of those kilometers, we can calculate the fuel savings. The diesel will need 30,250 litres of fuel – the 2015 gas pickup will need 37,950 litres. Thankfully, it will take us several years to put this many K’s on the truck. If we use $1.25 a litre for fuel cost estimates, the diesel will save us roughly $9,625 in fuel. However, it is a 10-year-old truck vs a 2-year-old, so it could cost quite a lot of that amount in increased maintenance…  but on the other hand it may not. Problems are more likely to be with peripheral items, like the A/C, and power items, etc. Of course, we are not going to get bent out of shape if some unimportant doodad quits working.

One other option is that I could spend a couple of thousand on the 2015, and try lowering it to see if that improves the mileage, but then again, it likely won’t save enough to pay for the modification.

The gas pickup is quieter, and this is immediately apparent when you step from one truck to the other (the gas you don’t shut off in a drive through). On the simple decibel meter in the iPhone, the diesel is at 78 DB when towing, and the gas truck only shows 71 DB. The new diesels are quieter and of course more powerful, but they are very complex and fuel economy is not likely to be as good as this ‘07. Fuel range is better on the diesel, but gas is sometimes easier to find.

So, in conclusion, it is six of one, and half a dozen of the other. We put 25 – 30,000 kilometers a year on a truck. If I was putting on less km, or towing very little, I would stay with the 2015 gas pickup, but I think we will take the gamble on the maintenance costs and run this diesel until someone puts a smaller diesel in an HD truck. Since we can hope for anything, let’s hope the new diesel pickup is lower and more aerodynamic with independent front suspension and lots of rear axle capacity – now that would be a sensible truck!