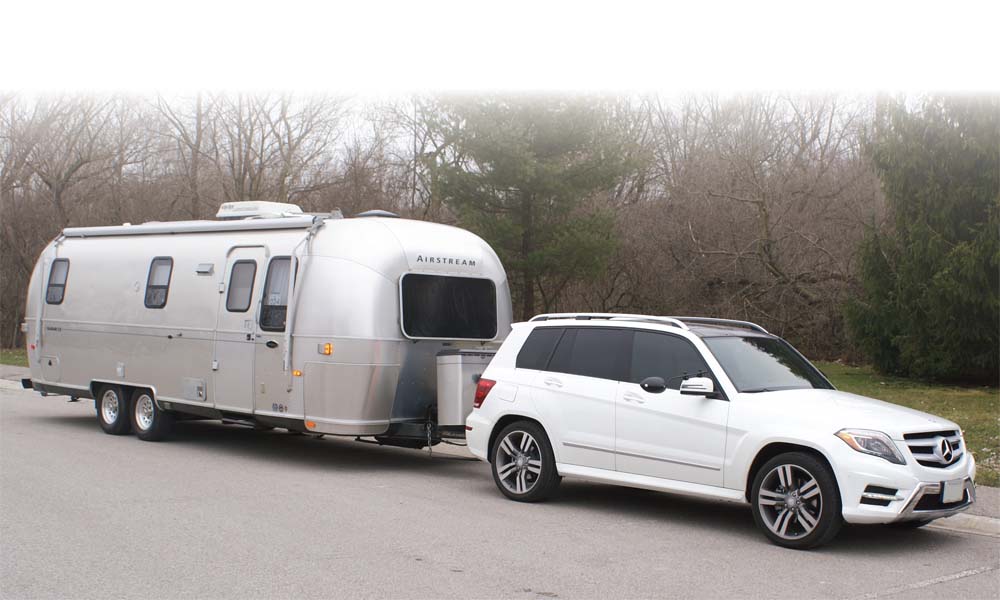 There are several diesel SUVs on the market that are very capable tow vehicles as they offer more than 400 pounds of torque. While they also offer optimum mileage for a full size 4×4, they can still be a little powerful just for smaller, aerodynamic trailers. At the other end of the spectrum, for example, Volkswagen diesel cars get incredible mileage with 236 pounds of torque and 140 hp, and can tow smaller trailers quite easily. But with the excellent towing capabilities of these vehicles, we have been hoping for a diesel that would bridge the gap between the two.

Enter the Mercedes GLK250 SUV. It has been around for quite a while with its 3.5 L V6 engine and we have set up a few trailers with them. What’s interesting, however, is the GLK is now being offered with the 2143cc diesel engine that produces 369 pounds of torque and 200 horsepower.

All GLKs have a seven-speed conventional automatic transmission with paddle shifters on the steering wheel. The base price is quite reasonable for a Mercedes at $43,500, which includes everything you need. It is a Mercedes, so you can, of course, add a lot more bells and whistles.

I had been thinking of possibly getting my hands on one to determine its towing prowess, but one of our customers had beaten us to it. The customer tows a 27’ Airstream Safari, weighing 5,500 pounds (dry). They have owned the Airstream for approximately 10 years and their first tow vehicle was a Toyota Sienna, and before that they owned a Toyota Camry.

After good service from both of these vehicles, they were in the market for a compact SUV that would be capable of mild off-road use. However, since they also do a lot of traveling, they didn’t want to give up the fuel economy of their Camry. So the GLK was the perfect answer.

While running along a north-south stretch of road for a cross-wind trial in 5th gear at 100 km/h, the package delivered 12-14 L/100 km at 100 km/h. I wouldn’t be surprised to see this package average more than 20 miles per gallon towing. 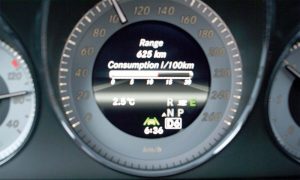 The customer reported 5.9L/100 km on the solo trip to our dealership. As it turns out, fuel economy is a little better than their Camry, even with the addition of four-wheel drive and the extra drag of an SUV.

From a performance perspective, the massive low end torque of the GLK means it’s easy to mistake this engine for one of the 3.0 L V6 diesels at low speeds. At highway speeds, especially in the heavy winds, we experienced situations where there was less horsepower on tap, but the overall performance is more than respectable.

At first glance, the 108.5 inches wheelbase would seem rather short for a tow vehicle but the rear overhang is only 28 inches – thus overhang is only 31 percent of the wheelbase. In addition to this is very precise steering and an excellent four-wheel independent suspension. This car was loaded with options and one of them was the AMG Sport Package, which upgrades the tires to 245/45R x 20 inches, which would appear to be perfect for towing. They are pretty good but definitely geared more towards a soft ride than super precise handling.

Still, even in the 55 km/h cross wind gusts, there was very little feeling of the trailer. The standard GLK comes with 235/50 x 19-inch tires. I have driven other GLKs with this tire size and I don’t think the 20-inch tires have a big advantage (other than appearance).

The excellent handling is also the result of its rock solid body structure. If this is like other Mercedes models, it will stay that way. Recently, I happened to tow with two Mercedes ML models back to back. The first one had 26,000 kilometers and the second had 148,000. Many vehicles loosen up a little by the time they have 148,000 on the clock but these two felt virtually identical. 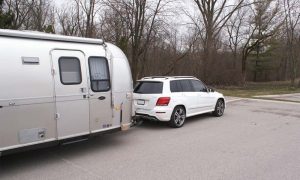 However, I did find that there are two disadvantages to the GLK. The first is that it doesn’t have a spare tire and since this customer does a lot of traveling in remote areas, they really wanted to have one. The Airstream has torsion axles and is designed to be towable on three wheels. Therefore, the Airstream spare is not really necessary. In fact, many Airstreams don’t have spare tires at all. Thus, they will switch out the Airstream spare with one for the GLK just in case. For most people, I’m not sure the lack of a spare is a huge issue but I do know that I have not had a vehicle flat on the road in 20 years. If they were to mount a spare under the GLK it would necessitate a much longer rear overhang that would hinder the very nice ride and handling combination. So, I would take the everyday handling for the once-in-a-blue-moon chance that I might need a spare tire.

The complex electronics on the GLK were also not compatible with the conventional electronic brake control. The control would work for a while and then stop for a while. A new higher-end control called a Direct Link solved this issue. This neat control plugs into the vehicle diagnostic port and uses the vehicle’s computer information to apply the correct amount of trailer braking. We run into this situation on many vehicles these days where communication between electronic components causes strange things to happen. But it doesn’t even have to be an exotic vehicle. Occasionally we have the same problem with Chevy Venture vans. The solution is usually just a matter of trying different brands until you get one that is compatible.

The only factory-hitch option for the GLK is a 1.5-inch class two hitch. But there are aftermarket two-inch receivers available but like many others, they are not strong enough for weight distribution. So, strengthening a location forward on the vehicle between the back tires is necessary just as it is on many other vehicles.

Now I wonder if they will put this engine in the much more efficient C class sedan. I think mileage would approach the Jetta, but with all the extra torque and horsepower, it would be a very capable tow vehicle. I think I’ll wait for one of those to update the fleet. It is amazing to see what this advanced diesel engine technology is capable of. Some in our industry are worried about the future of towing with higher fuel economy standards, but I think if the RV industry pays a little more attention to aerodynamics, suspension and balance, we will be just fine. The best tow vehicles are yet to be built.