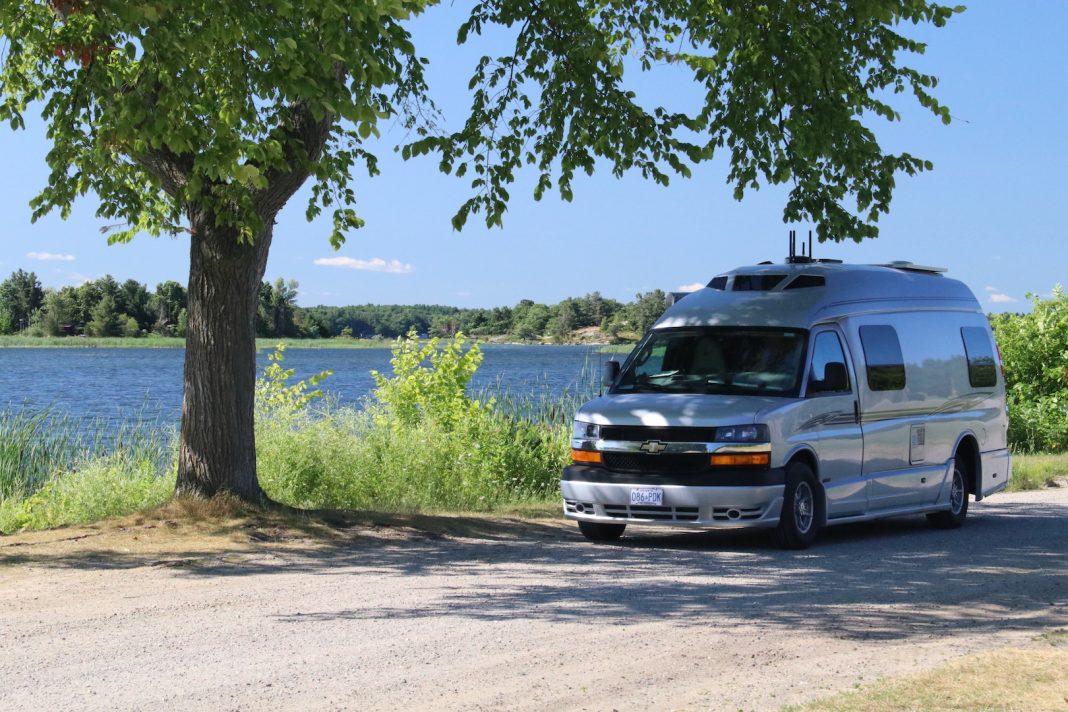 Eastern Ontario is well known for its quiet rural beauty. Forests cloak the land, interrupted by attempts at farming between the rocky outcrops. Best of all, sparkling blue lakes and rivers abound. In places where the rock of the Canadian Shield is present, you will usually find the best scenery.

The Town of Gananoque sits just within the Precambrian rocks of the Canadian Shield in a narrow section called the Frontenac Axis. This connects the massive Canadian Shield of Canada to the Adirondack Mountains south of the St. Lawrence River.

Gananoque is often referred to as the Gateway to the Thousand Islands. It certainly is a water oriented town with plenty of marina space and opportunities to cruise in a triple-decked cruise boat with a choice of tours from 1 hour to 5 hours in length. You might enjoy a sunset cruise with a meal and music. Gananoque has the Gananoque River running through it and also it faces the St. Lawrence River. The town does not have a Municipal Campground, and it’s difficult to get around in and park with large RVs.

The largest island of the 1000 Island group is Wolfe Island, and it’s entirely within the boundaries of Canada. It is also facing Kingston, at the beginning of the St. Lawrence River. This would make Kingston the real Gateway to the 1000 Islands.

Kingston also has many historic sites to visit, including Fort Henry, and it has shopping centres out in Old Kingston Township that is large vehicle friendly. If you camp nearby and plan to check out the downtown area, you need a small vehicle and a place to park or take a tour bus. Downtown Kingston is not RV friendly.

Although this area on the St. Lawrence River is known as the Thousand Islands, it is a bit of a misnomer. There may be over 1800 rocky islands if you count the nubs which just clear the water, as well as larger populated islands. These islands are the glaciated remains of old mountains that were composed of very hard and erosion resistant igneous rocks. The glacier gouged away, somewhat flattening them, and for a few thousands of years, the river has worked away at what was left but hasn’t made a lot of headway at removing them. The name, 1000 Islands, covers the 50-mile strip of the river from Kingston to Brockville.

It’s the hardness of the Precambrian rock that provides this part of Ontario with its scenic beauty. It’s hilly, has areas with steep cliffs, and has many lakes, and marshes. People come from all over to see it, camp within it, and to hunt and fish. There are many species of plants and animals living in the Frontenac Axis region, something that makes it very special.

People have not always been kind to the islands. In early days huge pines stood on the islands and shorelines of the river, but they fell prey to British loggers who cut thousands and floated them down the river to Montreal where they could be loaded on ships. Later on, the trees were cut for fuel for homes, and to feed the boilers on steamships. Fortunately, years have passed, and there is considerable re-growth of the forests so they look very good now. But now they are facing a threat from the Emerald Ash Borer and many ash trees are dead or dying so island visitors may have to put up with clearing crews who are removing trees where they would be dangerous to visitors.

Further protecting the islands is the Thousand Islands National Park comprised of 20 islands and 3 sections of the mainland. Visitors can access the islands by boat, their own, or rent from nearby marinas. Some islands are accessible by a shuttle boat service. Once there you can camp under the stars with your tent facilities or book one of the roofed accommodations.

Visitors who come to camp in the area will have several choices. If you want to camp near Kingston, Rideau Acres Campground is handy and located on the Rideau Canal shores. From here the sights of the 1000 Islands are an easy daily drive. The Ivy Lea Campground, right at the 1000 Island International Bridge provides a woodsy setting. Part way down the river, the 1000 Island KOA would be convenient for driving both ways along the St. Lawrence River, and to explore inland to visit the little villages of Delta which have the Old Stone Mill National Historic Site, Lyndhurst, Athens, which has interesting wall murals, and Lansdowne. 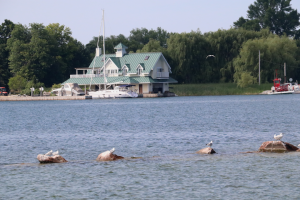 We are talking about the 1000 Islands, and that means you should get onto the water to see them from the vantage point of being out there with them. The abundance of islands upstream of the 1000 Island Bridge, and in the vicinity downstream puts the Gananoque Boat Line right in the midst of most scenic sections. They have a variety of tours, from the one hour Beauty of the Islands Scenic tour, or the two and a half hour Lost Ships Cruise to the five-hour cruise with a stopover at Boldt Castle.

The Boldt Castle is a real looking Rhineland castle from which Walt Disney could have patterned his castle. The view from the boat of its red roof and tall standing chimneys, and its round towers certainly entices you to further your adventure with a stop. The building of the castle is a sad story.  Mr. Boldt was building it for his wife. Unfortunately, she died before the work was done. He stopped the work, left, and never returned. It is being restored by the 1000 Island Bridge Authority.

There is one drawback to visiting the castle. It’s on American soil so you still need to have a passport with you to visit this structure.

As you tour down the river you are going to see some very expensive private homes and cottages. You are also going to see many small boats heading through the pretty islands, and you will likely see some very large sea-going vessels heading into the depths of Canada to some port along the Great Lakes.

If you have a bicycle with you, you can enjoy the Waterfront Trail, a rolling 37 km trail running from near Gananoque, east almost to Brockville. It is a wonderfully paved trail with the rugged hills of the Frontenac Axis on the north, and the myriad of islands of the Frontenac Axis to the south. Most of the way you will find it quite quiet. The adjacent highway is lightly used, and communities are well spaced. Best of all, there are lookout points, historical sites, and a few places to have a snack. If you want, you can do some relaxing on the river. Brown’s Bay Beach and Day use area is right on the water and offers swimming, picnic areas, a playground, and boat launch facilities.

This route, built before 1940, was a four-lane highway but returned to a two-lane scenic highway once Hwy 401 was built. One side of the 4 lanes became a walking trail, the other became the 1000 Island Parkway.

While you are exploring the islands and nearby areas, take a rural drive into the backcountry. The Village of Delta, north of Gananoque has a restored 1812 building, the Old Stone Mill, which shows the level of technology available for the farmers and citizens during those formative years of our country. It is now the Old Stone Mill National Historic Site. Tour on your own, or with a guided group. The millstones are 200 years old and they are still grinding wheat into flour.

Lyndhurst has a masonry arch bridge thought to be the oldest bridge in Ontario still in use today.

If you’d rather camp by the side of the St. Lawrence River, you could try the Ivy Lea Campground which has over 100 campsites in a very pleasant treed area.

The river as we know it today looks very pleasant and quiet with fishermen, family boats, and tour boats passing steadily. But the past has had its dark days. At least during three periods, the river was used to carry the military of England into the interior of the continent because of wars that involved the land to the south. The War of 1812 saw Canada being attacked by southern enemies in an attempt to conquer the young Canadian Nation. While the USA lost the war, the threat remained and led directly to the digging of the Rideau Canal. The fear on the Canadian side of the border was that the USA could blockade the St. Lawrence River preventing goods and services reaching the Great Lakes from Montreal and Quebec. The Rideau Canal would provide a route to Ottawa and down the Ottawa River to Montreal in case of a blockade on the St. Lawrence River.

A period of mystic, treachery, and daring emerged on the waters of the river in the midst of all those islands after 1920. The country to the south outlawed the sale and the manufacturing of booze. Ontario residents, ever thoughtful, jumped quickly to ease the thirst pangs of their southern friends. Canoes paddled quietly in the dark carrying a few bottles of precious cargo across the river, bigger boats made high speed runs hoping to outrun or hide from the lawmakers. You think of a possible way to smuggle rum across the river, and it’s probably been done. There are reputedly bottles still littering the river bottom from stashed cargo, disposed of cargo, and accidentally lost cargo when boats sunk, or vehicles making the trip on ice dropped through.

Now the pleasure boats are out there, just having fun on the sparkling blue water of the St. Lawrence. RVers are camped at one of the several camps along the river, while their occupants swim from the beaches, or cook their rustic meals on a barbeque. Whatever reason you like, why not make a trip to the area? You’ll likely find a lot more things to enjoy than you might expect!

For over 4 decades James and Sylvia have been touring the byways of North America. See his website at StonessRVtravel.com to purchase his Touring North America RV travel guides which show a variety of routes to places he is writing about. These are now available as downloads. 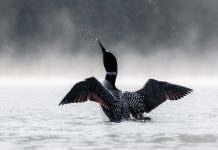 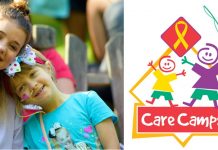 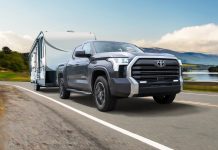 Monument Valley In the land of the Navajo Nation