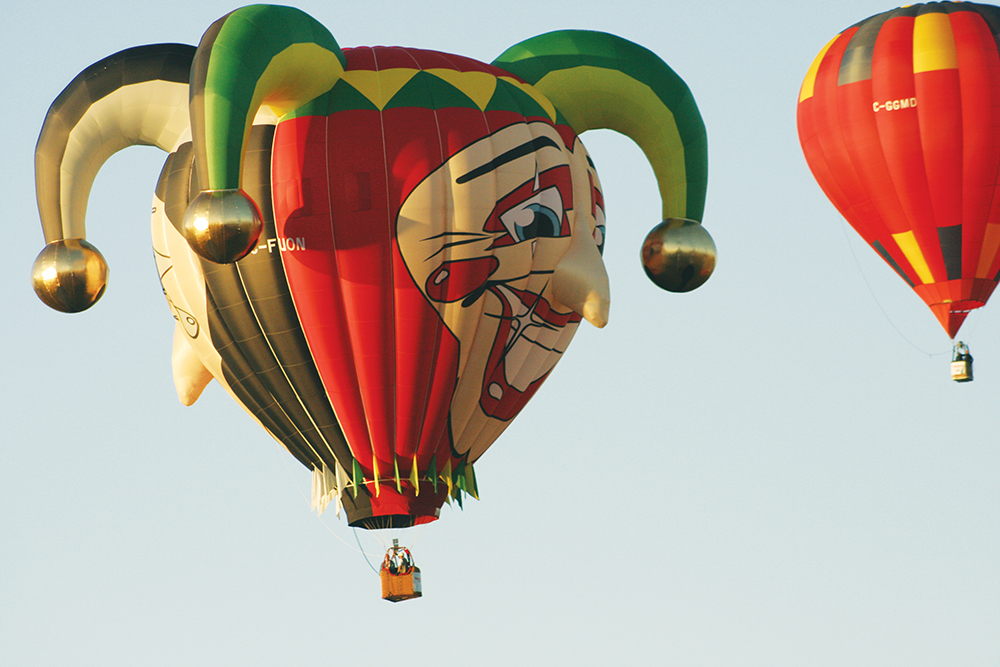 It’s the Highlight of an Ottawa Area Summer!

Text and photos by James Stoness

Imagine floating serenely over our Nation’s Capital, seeing the Parliament buildings from above, and thinking how quiet and relaxed everything seems. Below the basket you see huge mansions with expansive green lawns, blue swimming pools, and ornamental trees as you drift slowly past. Yet there is hardly a sound to interrupt your thoughts – only the occasional blast from the burner as the pilot adds a little more heat to the air inside his balloon.

Your dreams of flight come alive at the Gatineau Hot Air Balloon Festival, held each year on the Labour Day Weekend just across the river from Ottawa. The Balloon Festival has been a hit since its inception in 1988, and every summer more than 200,000 people attend the highly popular fun filled weekend – it has become the nation’s favourite party, marking the end of the summer holidays and celebrating the beginning of autumn. 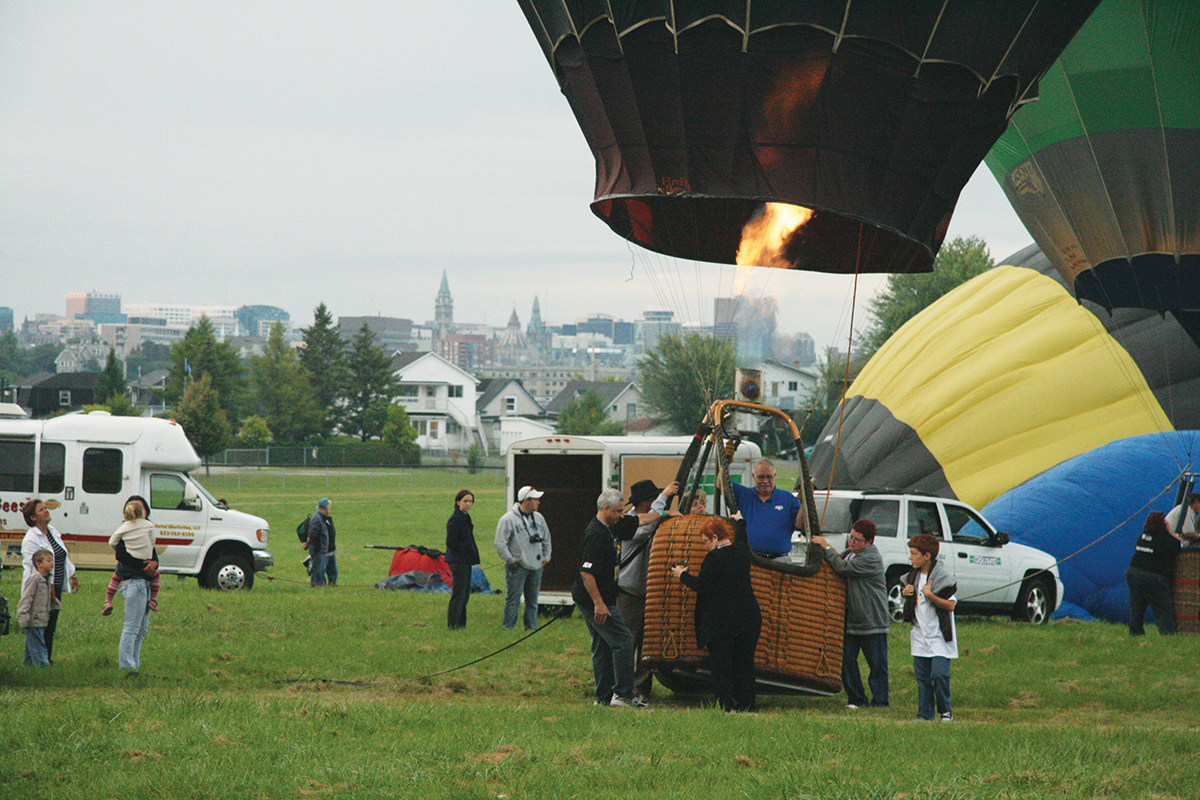 The festival is not just about balloons. There is a wide variety of events providing fun for young and old. The midway has the usual stomach upsetting spin rides and last fall when we were present, the festival had a visit from ‘THE BOOSTER’ which is similar to the trainer used for aeronautics. Its circular motion is capable of 3.6 G force, which judging from the screaming, the kids seemed to love.

There was also a fine exhibition of classic automobiles and a display of motorcycles. For those who didn’t have an interest in cars, there was a crafts corner displaying artists’ work in glass, textiles and wood. In another tent you could purchase a variety of items for your home and beauty needs.

The Sky Hawks – the Canadian Forces Acrobatic Parachute Team, put on a fantastic show full of aerobatic moves that was extremely colourful because of their red and white Canadian flag designed parachutes. They twisted, and whirled, streaming white smoke in fantastic patterns, made all the more brilliant back dropped against the deep blue sky and the sun. The precision of their movements and their pinpoint landings made the Sky Hawks a tremendous hit with the crowd.

With a bang, and a flash, the night sky lit and the fireworks show was on. For several minutes the crowd was treated to umbrellas of fire, alternating with thundering explosions, and added to by the huge variety of pyrotechnics available to the skilled company putting on the display.

Many took their chairs down to the Molson Dry Stage which blasted a much too loud, thunderous cacophony of stringed instruments, drums, and singing across the entire park. At intermission the Tim Horton’s laser light show put on a choreographed light show illuminating the sky with a variety of patterns and figures.

At a balloon festival it’s to be expected that the balloons are the big draw. The Festival claims to have the fifth largest gathering of hot air balloons in the world having at times upwards of 150 balloons brought at considerable expense from several countries.

It’s a thrill to watch the men pull the equipment from the truck, stretch it out on the grass and hook up the basket. It takes a large crew to prepare the balloon for flight. The next step is to partially inflate the balloon with a large fan. Then the giant gas burners take over. With each blast of flame and heat the balloon fills a bit more until finally it begins to tilt upward tightening against the tie down ropes. All across the grassy field this is happening, and as you watch, colourful balloons pop up like mushrooms sprouting in a forest until the sky is filled with their huge canopies.

Rides are popular, and there are long lineups waiting for a chance to get aboard one of the wicker baskets. These adventurers are impatient for the moment when the rope is released, and when almost without noticing they break free of earth’s shackles and rise to the sky. My wife, who does not like heights, enjoyed her balloon ride. In the basket of the balloon it’s almost as if you are still on the ground, not at all like standing on the edge of a cliff and looking down.

The balloon is a servant of the wind, where the wind goes, so goes the balloon. Wind speeds and direction vary with height and this gives the pilot some control over where he is going. Other than that his control over the balloon’s path is limited to adding heat and making it rise, or letting the gases cool, or releasing some of the trapped air, and letting it sink. The pilot attends a very early morning briefing in which he learns of the air conditions, and weather predictions. There are strict limitations of weather conditions under which the balloons are allowed to take off. Flights are usually early in the morning, or later in the afternoon when winds are generally not so strong. Until the weather expert gives his signal, no balloons may take off.

As the balloon begins to float with the wind currents, the passengers begin to experience the thrill of the rising balloon and to enjoy the unfolding scenery. The camera that you bring may be temporarily forgotten as you ooh and aah at so many different things. However, the camera is there and should be used. This the time for a good zoom lens otherwise pictures of nearby balloons are going to look mighty small.

It is also necessary to keep all eyes out for potential problems such as another balloon rising up under you. For all balloons, above them there is a blind spot because the balloon’s envelope is huge. Also, as you float along it’s necessary to watch for good landing sites just in case it is necessary to land earlier than expected, which does happen. 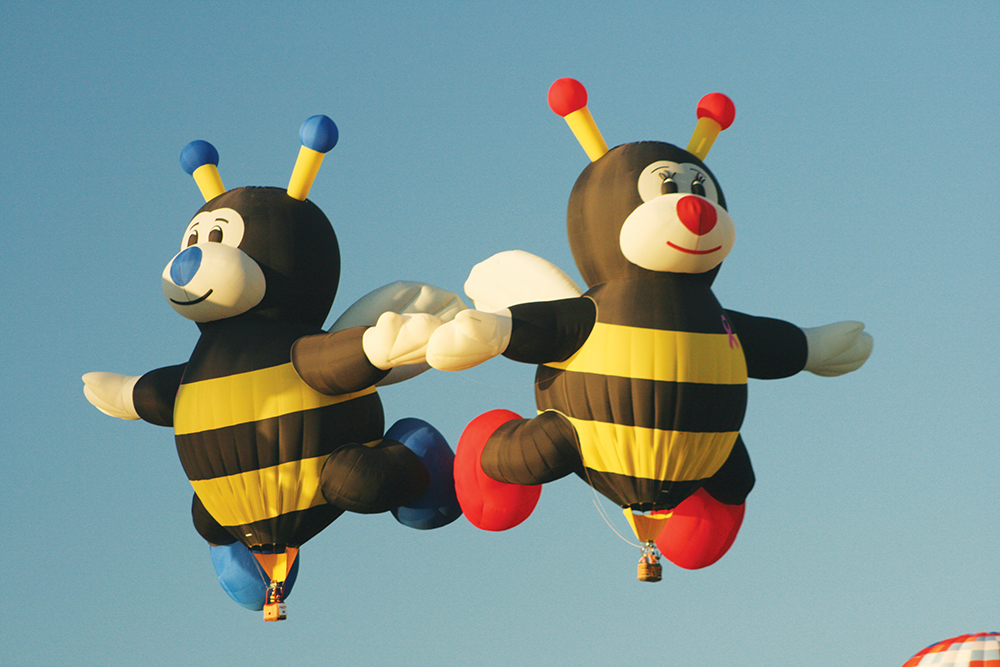 I was in a balloon over Albuquerque planning on passing by the airport. The pilot knew that planes would be landing on runways parallel to us since they usually land into the wind. To our surprise, a large airliner cut across in front of us, landing perpendicular to the wind. I guess he read a different book about landings! So it became necessary to land immediately before someone flew through our balloon. We had been watching for spots to land and made use of one of the spots we had picked out earlier as a potentially good landing place.

One of the things to watch out for are hydro lines and fences, neither are the sort of thing you want to land on. The usual trip takes you out over farm land with lots of opportunities for easy landings in areas for the chase truck to pick you up. Imagine how difficult it is for the chase truck to follow a balloon which goes across country, while it has to follow the roads. The chase team also has to keep you in sight, midst all the other colourful balloons in the sky with you. 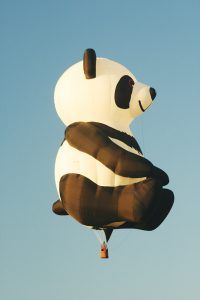 In spite of these distractions a ride in a hot air balloon is one of the most peaceful trips you will ever take. You don’t feel any wind, and it’s usually very quiet. Around you, at a festival, the sky is filled with dozens and dozens of other balloons which make great photos.

When the pilot wants to land he lets the balloon sink towards the potential landing site. This might require releasing a little of the hot air through a small opening in the top of the balloon. Slowly you sink towards the field. Sometimes it’s necessary to turn on the burners to make the balloon rise over a tree line between fields, or as in my ride at this festival, we were just floating along touching the tops of tall green corn and lifted up to select the next empty field. Then the descent continues, followed by touchdown, at which time the pilot releases more hot air to make sure you stay down and don’t go floating off again. These trips are a real treat, from the gentle rise upon takeoff to the final landing. After the landing the pilot may break out the champagne to toast the trip and welcome first-timers to the world of ballooning.

Today’s balloons range from the common teardrop shape to fantastically designed balloons of many shapes. At the Gatineau Festival the sky was filled with a ladybug, a honey bee, a joker, a big peanut with a tall hat, Darth Vader, a big green dragon, a pirate in a barrel, and dozens of other gaily decorated balloons.

For those who don’t want to take the balloon ride, there is the sheer pleasure of participating in ‘night glow’. This is the time in the evening when balloons are tethered and inflated. Pilots send the burner’s flame into the envelope making it glow. This is a time when you can walk nearer to see the beauty of the different balloons. You won’t believe how pretty these unusually shaped balloons are until you see their glowing envelopes towering above. It’s a wonderful sight! 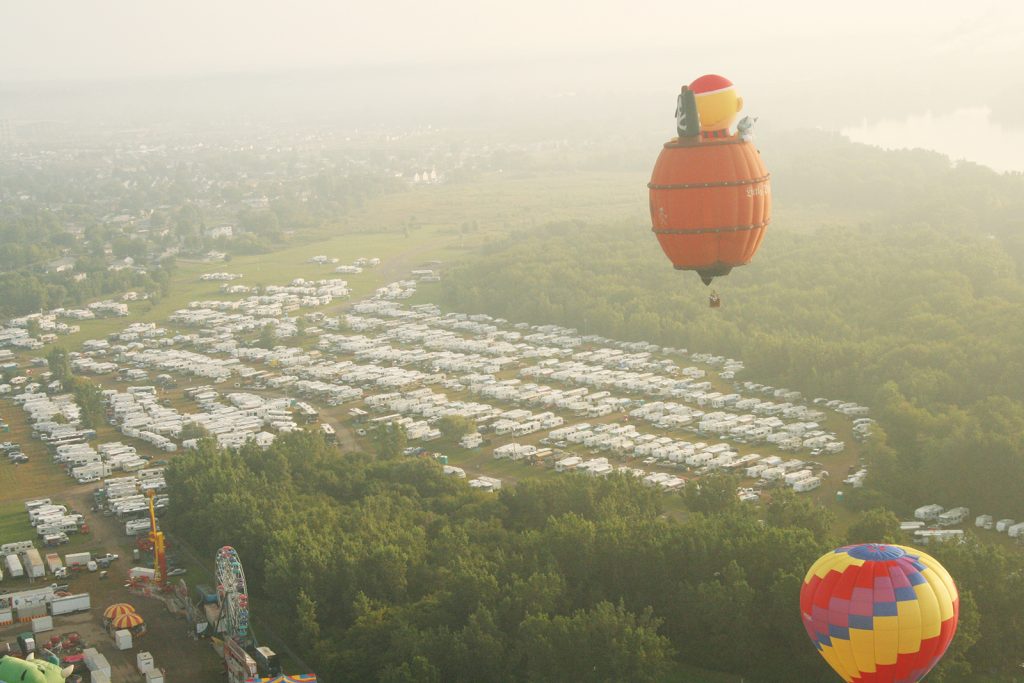 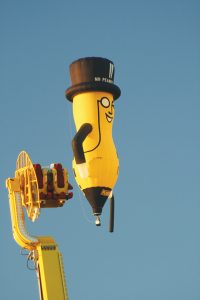 The festival attracts many RV’ers and provides camping on site. It’s not unusual to have 1200 RVs filling the field back dropped by the parliament buildings. Sites are not reserved and are filled as you arrive. If you are with a group of friends it’s necessary to arrive together if you want to camp together.

While you are in the area, it’s a wonderful opportunity to visit some of the attractions and events. If you are muscle sore and weary after walking through the booths at the festival, a visit to le Nordik Nature Spa will let you unwind as you soak in the outdoor hot tubs, or relax in the Finnish sauna prior to hurrying outside to cool off under their cold waterfall. Then top it off with a relaxing meal at their restaurant.

The City of Ottawa has much to see. Spend some time walking on the grounds and in the buildings of the Parliament Buildings complex and relive Canada’s history. These grand old limestone buildings with their copper roofs, splendid in their green patina, are not to be missed. The Peace Tower is a world recognized symbol of Canada and when the great bell of the clock strikes the hour you’ve just got to be there! Of course, for pageantry, it’s great to see the changing of the guard ceremony. Come in the evening and see the Sound and Light Show with huge images shone on the walls of the Parliament Buildings.

The Gatineau Hot Air Balloon Festival makes a fine ending to a Canadian summer, with something to do for the whole family. Of course it makes it even finer when you and your family and friends can camp together in an informal atmosphere of boondocking. Perhaps if you are not too far away, it might be something to put onto your future travel plan list. You certainly will enjoy it!