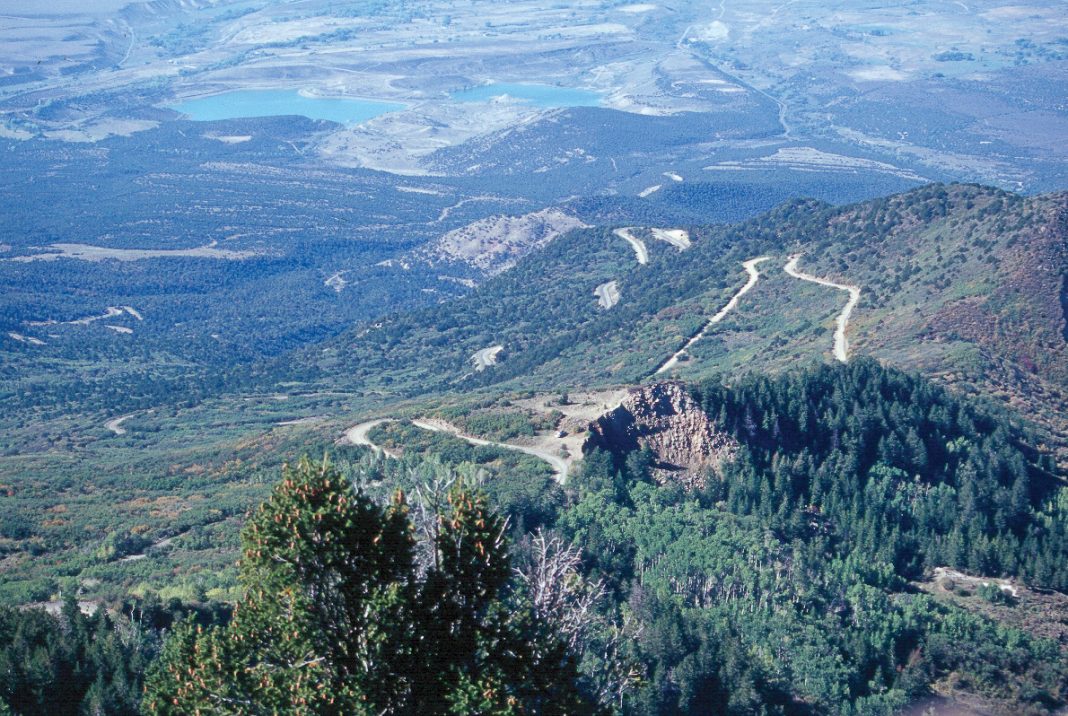 You’ll tour the splendour of the high country in style when you steer your RV on this route!

I love the Canadian Rocky Mountains. You can’t beat them for sheer splendour as their craggy, snow-covered peaks poke high into the blue sky.But you can’t get as close and personal in your RV as you can in the mountains of the Colorado high country.

Some of the Banff peaks reach above 11,000 feet, and look great… up there. In Colorado I’ve camped at 11,325 feet at Slumgullion Pass Campground. That’s one of the differences between the Canadian Rockies and those in Colorado. In Colorado there are roads that take you up and through the mountains. In Canada we look up at them, wishing we could drive up into some of those hidden places. In Colorado, some of the passes are very high, more than twenty being over 12,000 feet. The Eisenhower Tunnel carries 4-lane traffic through the mountain west of Denver at 11,158 feet. 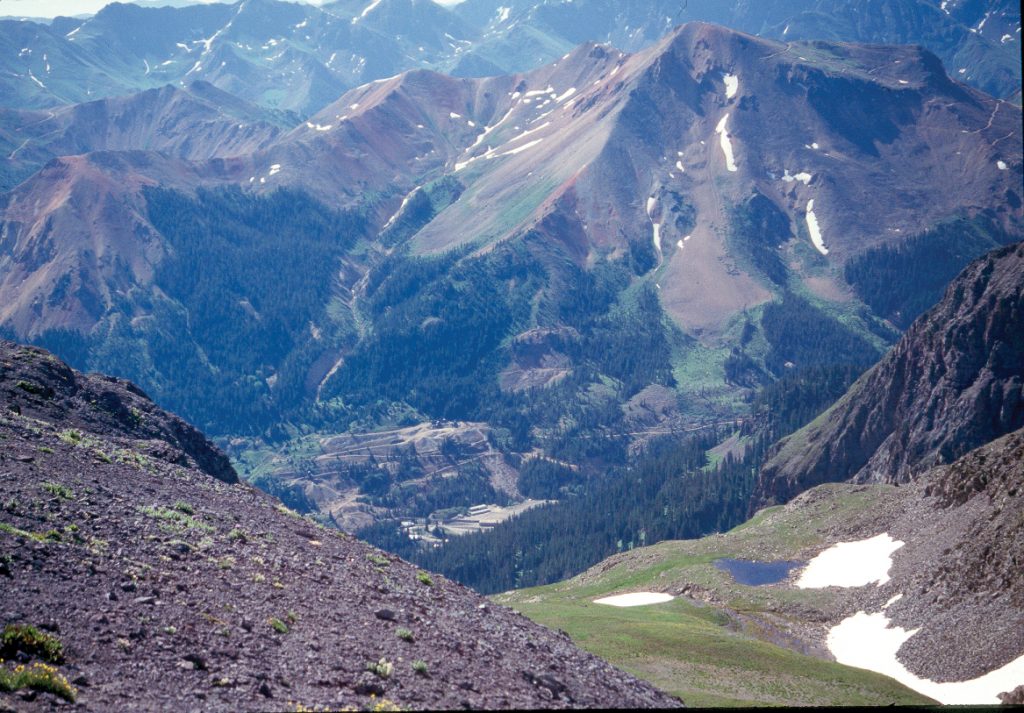 If the scenery here leaves you breathless, there is a reason other than beauty for it. After parking at the Slumgullion campground, I walked a short distance to register the campsite and by the time I got back to the RV, I was ready for a chair. Nothing in Ontario gets you ready for the shortage of oxygen that you find in the high country. From my chair I leaned back and looked at the forest of magnificent spruce trees that surrounded me. In Canada, I would be above the treeline enjoying the views of snowclad peaks.

For three weeks Sylvia and I roamed through the Colorado Rockies, camping frequently above 10,000 feet. We hiked some, with lots of pauses to recover, along the way. You do acclimatize quite quickly. After supper the same day I was exhausted from a short walk to register, I was able to take a longer walk and felt quite good afterward. Do what you would do at home, only at half speed. 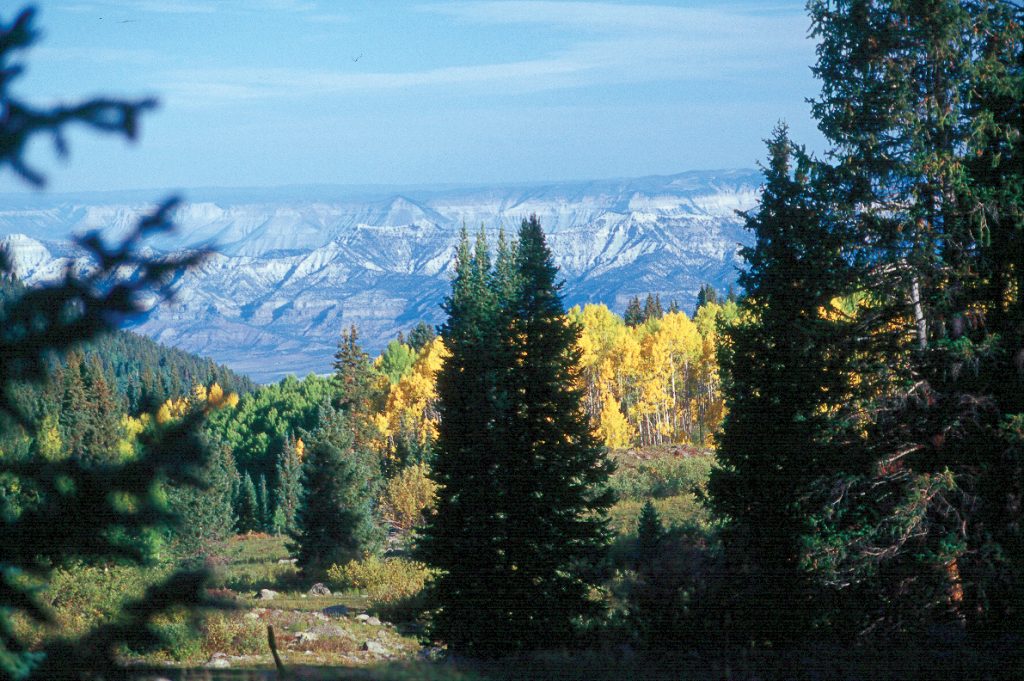 We had crossed the plains heading toward Denver, Colorado, and west of Denver we climbed into the mountains on US-285, a fine road with a 6% grade and sweeping curves, reaching Kenosha Pass at 10,000 feet, and never getting above the tree line. Our scenic companion along the way was the North Fork of the South Platte River. Sometimes it was placid, but most of the time it dashed through rocky rapids with spray and foam and plummeted down small waterfalls. It’s along roads like this that you see how broad these mountains are, with many gently climbing valleys bounded by higher cliffs. Sometimes you break out of the trees onto a wide plateau of grass, small lakes and streams. 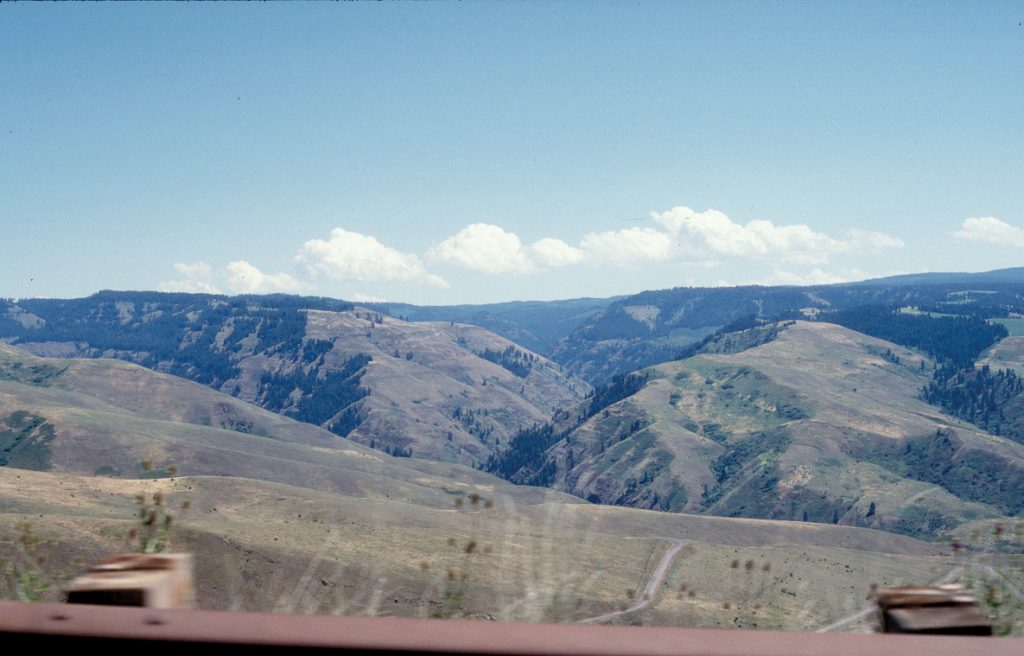 Forest roads branch off the highway from time to time, very tantalizing when you’ve got a 4WD vehicle in tow. Many of these forest roads lead to old mines. It was the gold and silver that attracted people to these mountains. They found deposits in impossible places and built impossible roads to them. Most active mines are gone, but trails to them still remain, attracting hundreds of visitors who rent 4WD Jeeps to experience the emptiness, and the solitude, of the vast high mountains. It’s been so long since the mining activity that most of the scars are gone, and it feels at times as if you are freshly discovering a country that no one knows about. The mines produced millions of dollars of silver, lead, and gold. Their development also absorbed vast amounts of investment money. 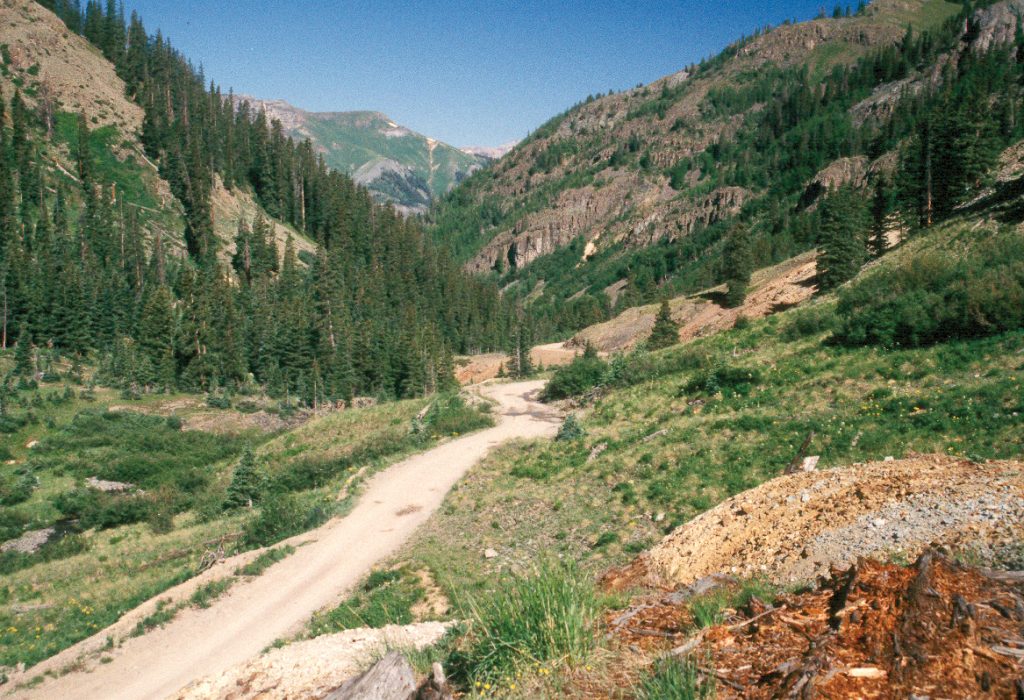 Just off the road at broad Kenosha Pass, 10,000 feet, there is an excellent forest campground located amidst large evergreens. A long time ago a railway crossed the pass here, and in the open area across the highway, there is a wye, a turn-around for trains in the shape of a Y. The rail line is gone now, and concerned citizens have restored the wye to retain a bit of history for the rest of us to enjoy, and reflect upon the days when construction crews built tracks all over the high mountains of Colorado.

These broad mountains originated as flat sediments created on a flat plain, and when a solid mass pushed up underneath them, the layers of rock bent forming an arch draped over the solid mass. With erosion, the centre mass became exposed to create mountains with wide shoulders and rounded tops. It was this topography that made it fairly easy for the prospectors and miners to make trails which were, in time, widened to handle wagons, and some turned into highways. The railways started to penetrate the mountains using the gently climbing valleys, and at times using tunnels to pass through areas where the rock blocked easy passage. 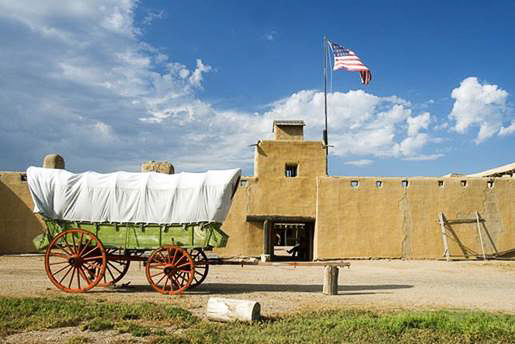 Then came ranchers, using the high valleys for summer pasture. The ranch might be at 7,000 feet and the cattle ranged up to 10,000 feet and higher.

The Colorado Trail, running 500 miles from Denver to Durango, passes over Kenosha Pass. The portion of the trail in this area is easy hiking for almost anyone, and in the autumn, it’s crowded with leaf watchers. The views from the pass to distant mountains can be splendid when the leaves are in colour. The golds of the aspen mixing with the stands of evergreens, and backdropped by the reddish peaks of far-off mountains make the perfect artist’s palette. 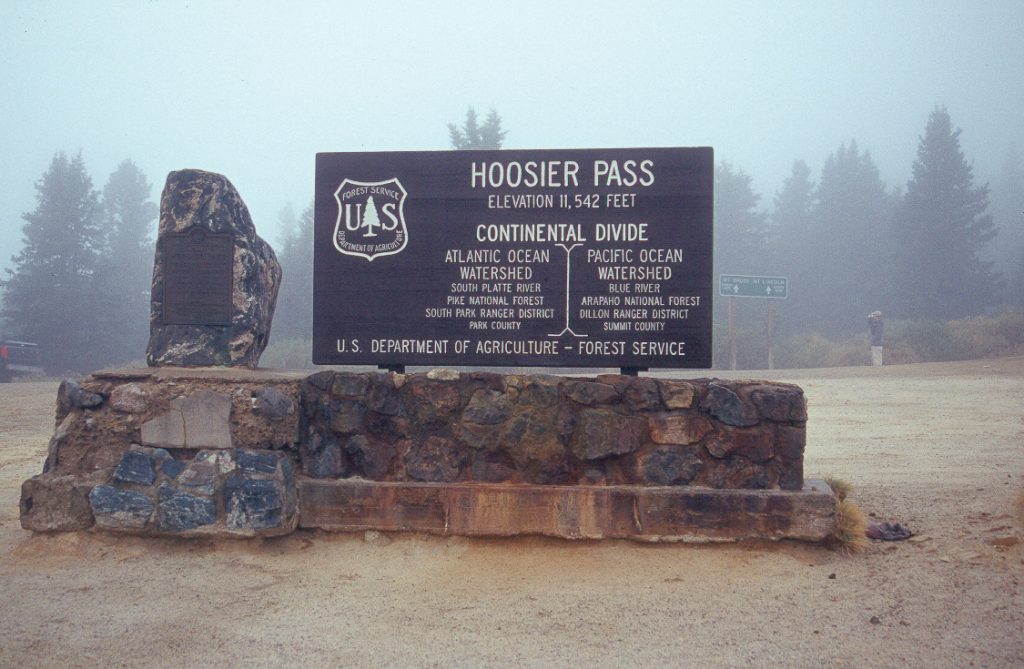 We drove over several passes ranging to 11,541 feet. Most of the roads were excellent with the grades running 5-9% (based upon my Rieker inclinometer). They are acceptable for most motorhomes, and for tow-vehicles that have been properly selected for towing. Often when driving up you encounter switchbacks or curves that slow you down to 10-15 mph, and usually these precede the beginning of a steep section of highway. You don’t get a chance to get a run at the hill! This is transmission cooler country!

Descending, don’t expect downshifting to be adequate to hold back the motorhome and towed car on the long grades. It was comforting to have the Brake Buddy back there in the car to lend a hand with the braking when we needed it. To avoid unpleasant surprises, we use Richard Miller’s excellent “Mountain Directory West” book to find out the percent gradient, length of hill and any dangerous aspects about the road before we go, so we have a really good idea of what to expect. 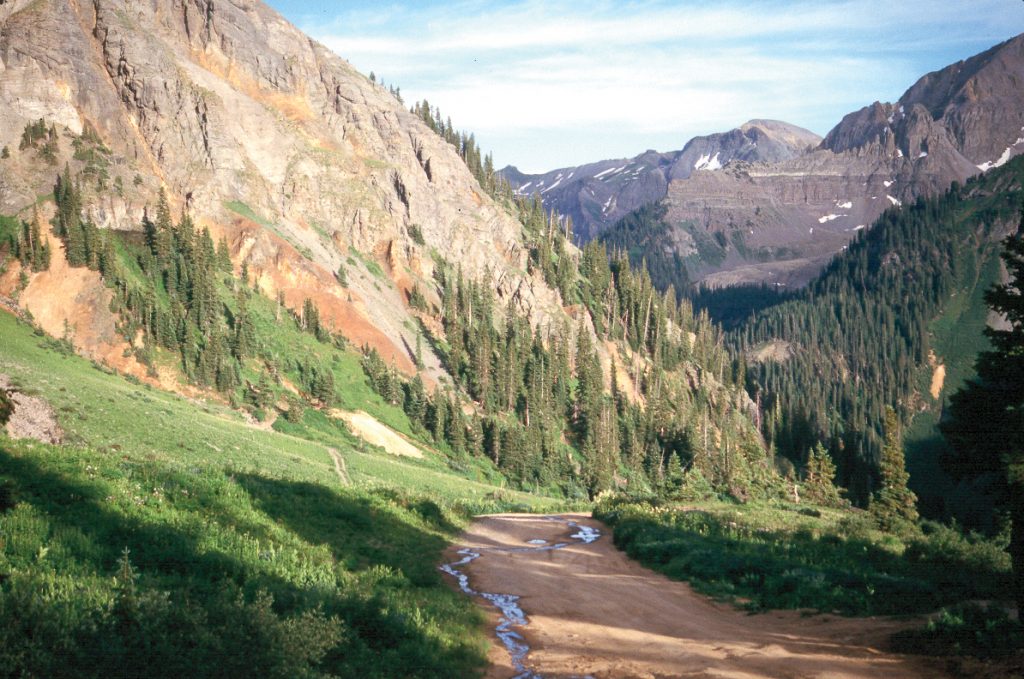 The trails to the mines and the abandoned railroads are now valued routes into the backcountry. Sylvia and I have explored several of the trails near Ouray in the rugged San Juan Mountains of southwestern Colorado. The County maintains the trails to encourage backcountry travel and draw people and money into the area. The trails need a lot of maintenance and running streams can make a real mess in a hurry. Have no doubt, the mountain trails are tough, rough 4WD roads. The only way to experience them fully, is to go there.

One of our side trips took us through unbelievable scenery. The fun began after we left the main road. As we climbed higher into the mountains we passed many mining ruins. Here and there old buildings, in various states of decomposition, marked the sites of old mining strikes. High on the sides of the mountains, small mining dumps pointed out determined, but likely futile efforts, to ‘strike it rich’. We saw the occasional wooden cross, poignant reminders of the end of a dream, and someone’s loved one who disappeared into the west. 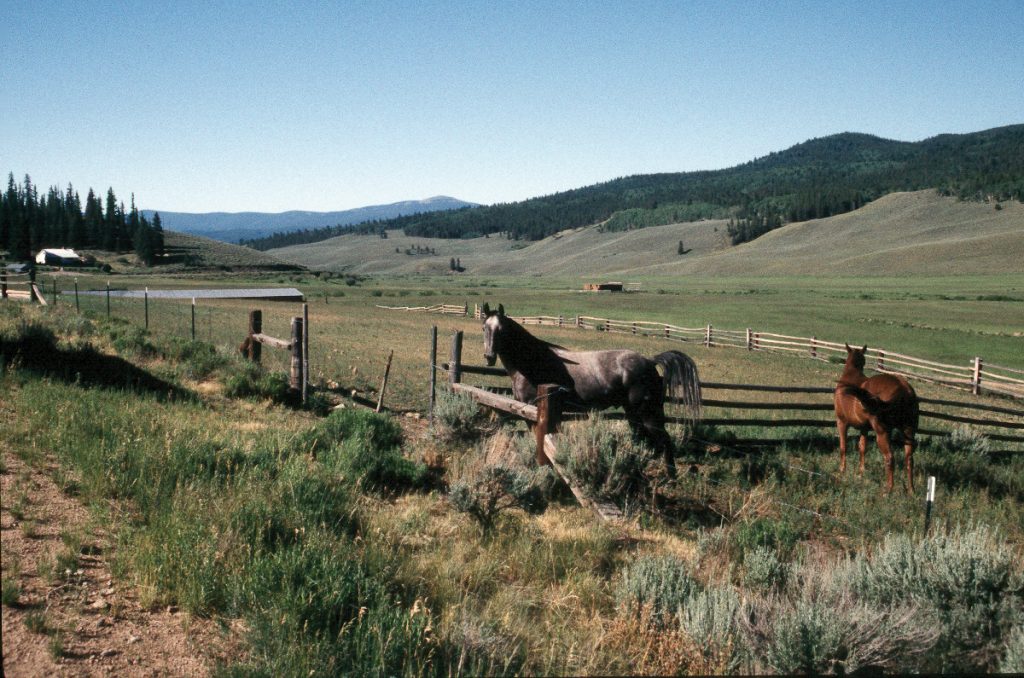 Scattered around we found bits and pieces of history such as old stamping mills that were used to pound the hunks of ore into powder. Abandoned rails that once carried cars of ore, headed into entrances of mines and disappeared. Do not enter these tunnels! The rock is decayed and the old timbers rotted, and they can collapse, suddenly and completely. These tunnels are relics from another time, and are very much enjoyed as tourist attractions. The actions and traces by past humans prove that history can be fun!

Where can you find any better adrenaline rush than you will find as you creep along the edges of deep canyons, more often than not perched on a steep ledge road with the canyon bottom hundreds of feet below, and a vertical cliff on the other side? Sometimes we climbed steep, rocky hills with the wheels spinning in loose gravel, even having to back down a couple of times to get a better run at it.

At the top of one such hill, we emerged into a broad meadow and pulled over to stop. Around us, were only the sounds of nature, a few birds, the chortling of a small stream falling from a melting snowfield, the wind rustling the trees, and sometimes, just the sound of silence. And what can I say about the flowers! We stopped frequently to snap pictures of the brightest or prettiest flowers yet, only to find another floral display farther on that surpassed it. Much later we reached a desolate pass at 12,000 feet, and the view was spectacular. In the distance, dozens of huge peaks strode in seven league boots towards the far horizon. 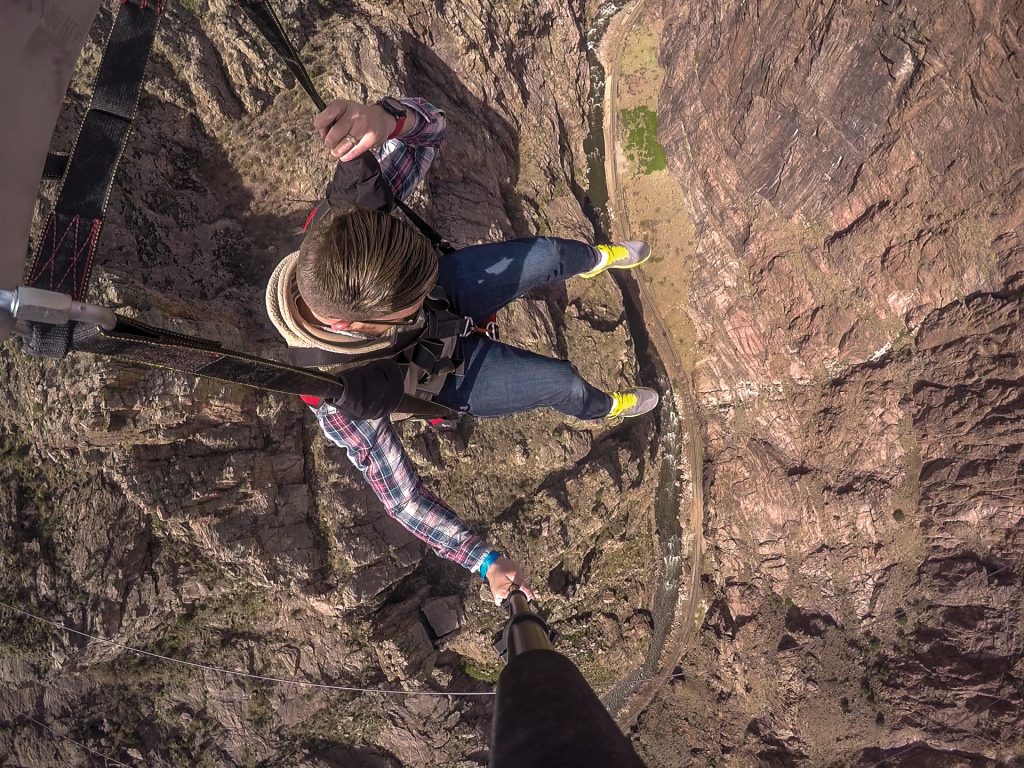 A drive often missed by visitors because it is off the regular tourist route is the road to Grand Mesa, which is a broad high plateau in western Colorado. Although it is clad in a forest of evergreens, it is above 10,000 feet. Col-65, a paved road, takes you right to the top. You will be surprised at the size of this plateau, with over 300 lakes and a bevy of streams mixed with great views of distant mountaintops. At the northwestern side of the mesa is an area called Lands End. From the edge of the mesa, you can see for miles and miles. For the adventurous, there is a dirt-gravel road, the Lands End Road, that descends through a myriad of sharp switchbacks and turns to reach I-70.  Some people make a circle drive going up and over Grand Mesa and back to their campsite.

Driving in Colorado mountains has always provided us with great scenery and a chance to explore. Don’t let mountains bother you to the point where you don’t go. The highways are good and with proper caution and good equipment, you’ll have an enjoyable vacation that will make you want to return another year.