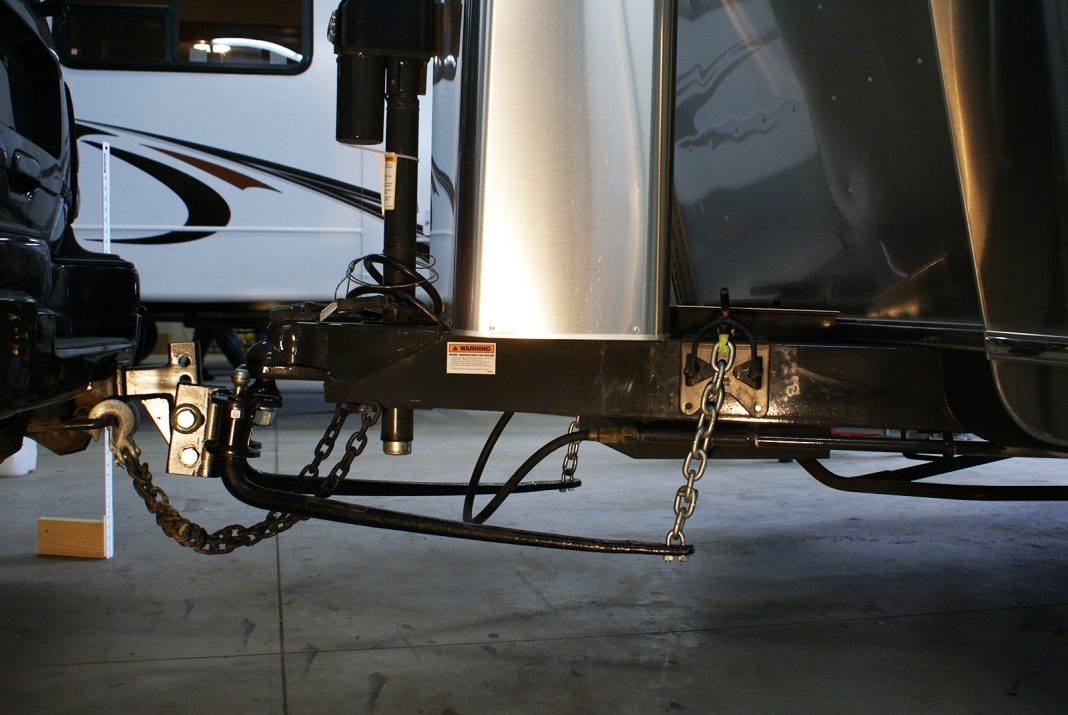 Tow effortlessly and smooth this season!

IN THIS PICTURE the ball mount is bolted together on the correct angle. Depending on hitch weight and ball height, this much angle may not always be achievable but desirable if possible. To many people this looks wrong, they justifiably think everything should be square and 90 degrees. That may be true in carpentry, but not the case with suspension geometry and weigh distribution hitches.

There are a couple of minor advantages to having reward angle, the chains wear less and there is more flexibility in the position of the snap ups. However, the main reason for having rearward angle on the ball mount is because the angle of the direction of weight transfer doesn’t change when you turn corners or change lanes. This gives you additional traction in sharp turns and much more stability at high speeds.

In reference to the chart above

The inside torsion bar is no longer aimed at the opposite front tire it is pointing at from the opposite rear wheel, so it’s trying to roll the vehicle over sideways and therefore, not transferring weight forward. The bar on the outside of the turn is pointing towards the centre of the car at the front, but less weight is transferred forward because one bar is pointed at the front of the car not two.

With the angled ball mount the tow vehicle stays balanced. The bar on the inside of the turn is still pointed at the outside rear tire but it has no pressure on it any more. The reason is because when the bar is sideways getting close to parallel to the back bumper, it no longer has an angled pivot point, we have a rearward angle and not a sideways angle. This causes the bar on the inside of the turn to unload and stop working.

The bar on the outside of the turn is now pointing straight up the centre of the car, but now has more angle since the maximum rearward angle is when the torsion bar is straight behind the tow vehicle. If you refer to the picture on page 8, you can see the arch that the torsion bar ends make as they rotate and the bars are positioned for a 22 degree turn. The bar behind the tow vehicle is only four inches off the ground and the bar we don’t want to transfer weight in this turn is seven inches.

The bottom line is that when we turn with the angled ball mount, we are still transferring weight to the front wheels and not trying to roll the tow vehicle over.

If we measure the difference in how a vehicle sits when turned with a vertical ball mount and an angled ball mount we get ¾ – 1.5-inch of added body roll when turning. So, before the vehicle’s centre of gravity or any other factors come into play, the vertical ball mount is causing the tow vehicles to roll side to side. It is also causing the front suspension to lighten a few hundred pounds.

Picture an emergency manoeuvre such as a sudden lane change. Just at the time when you want the most consistency from your tow vehicle its balance suddenly changes. If your rapid lane change needs to come back to straight equally rapidly you now have a vehicle that is suddenly rolling two to three inches side to side without factoring in what body roll (due to centre of gravity) adds to it and at the same time the front tires have less traction.

For those that are NASCAR fans you are likely familiar with the term “wedging a car” where they modify the weight on the tires with sway bars and spring rates to optimize traction on the continuous left turns. By using angle on the ball mount we don’t “reverse wedge” the tow vehicle when turning. If we were to start an “RV cup series” you would likely design a hitch for left turns with an extreme geometry.

Beyond making the tow vehicle much easier to control in an emergency manoeuvre, the ball mount angle also assists with directional stability going straight down the road at highway speeds.

Even in small degrees of direction change, the torsion bar on the outside of the turn increases in pressure much faster than the bar on the inside decreases. This is because as a torsion bar bends it requires progressively more pressure to bend it the same distance. With angle on the ball mount, the trailer wants to naturally settle in a position straight behind the tow vehicle.

More than half the trailers I see on the road actually have the ball mount pointed the opposite way of what it should be. This is because the ball mount was originally bolted together vertical and since the receiver has been twisted,  it is now pointing towards the tow vehicle at the top. This will make the trailer want to hunt side to side as the natural resting place for the ball mount is to one side or the other, never straight ahead.

Another way to think about it is to picture the forks of a bicycle or motorcycle and the way they always angle backwards at the top. This is why you can ride a bike with no hands. If the forks on a bike were completely vertical you would not be able to ride it “no hands” as it would be too unstable. The angle on the ball mount acts in some degree the same way the forks on the bicycle do.

If you have a bolt together ball mount adding more rearward angle is fairly easy to do and well worth the time.

Winter Camping with your RV

10 New Products for your RV lifestyle!

New Gear – Accessorize at your Campsite!