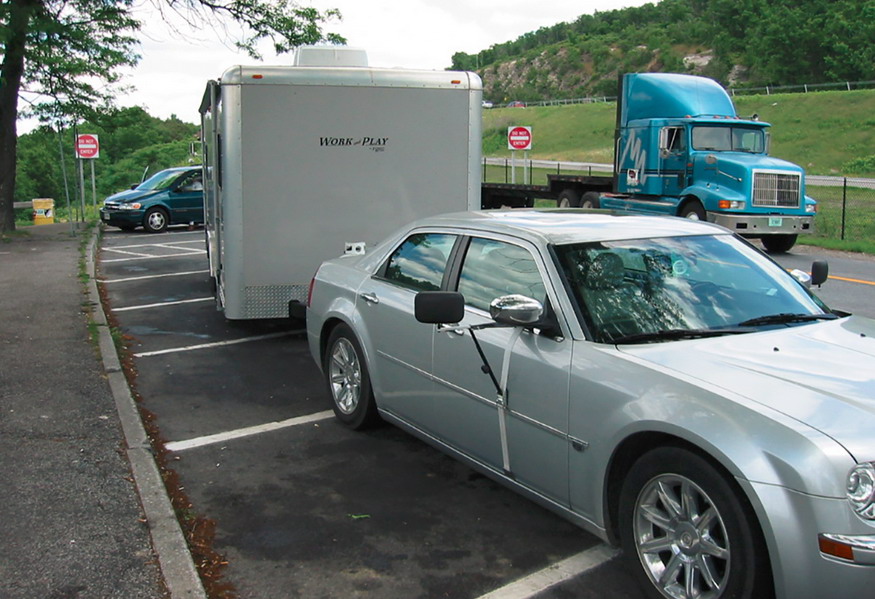 I often hear people describe the performance of their tow vehicle / trailer combination by saying that “you don’t even feel that the trailer is attached”, yet from our own track testing experience we know that they are driving a combination that will not handle as well as it could in an emergency situation.

Last year, we received a call from a gentleman from West Virgina, who asked us if we could set up his Chrysler 300C to tow his trailer. As it turns out, he tows a cargo trailer outfitted with living quarters, and travels extensively to attend trials motorcycle events. In addition to this, he is an airline pilot, and as a hobby he flies gliders. If you ever needed someone who was trained to drive or fly just about anything, he’s the man for the job. He had towed the trailer for a few years with a Caprice wagon but as it got old he changed to a 3/4 ton diesel truck, but it did not suit his expectations.

We sent him home with everything needed to set his trailer up properly with the 300C. I did not hear from him for a while after he returned to Virginia, so I thought that I would send an e-mail to see how he was doing. His reply helps to illustrate the point I am trying to explain.

Sorry I took so long to respond. I have been travelling a lot, and I don’t use the computer much in the summer.  A good summary of towing with the 300C – while travelling along I-84 thru mountainous northeast Pennsylvania my wife asked “when is it my turn to drive?” Being the control freak that I am, I politely responded, “you don’t want to drive with that huge trailer behind us, this is more work than you think it is”.  She responded, “It couldn’t be all that hard, considering you have been driving with 3 fingers on the wheel since we left home”.

Quite humbling to say the least – I can definitely “feel” the trailer behind us more so than I could when we towed it with our truck, but then again, in the truck you don’t “feel” much of anything other than bumps anyway. However, the handling of the rig when towing with the 300C is 100 times better than towing the trailer with the truck.

Before we left home I took the combo to my local airport, where I had lots of open pavement, and I ran a slalom course of sorts to find out just how it handled before hitting the open road. Stops from 60 mph are approximately 40 feet shorter than my with my ¾ ton truck…. (it’s kind of like comparing apples to oranges, I’m sure that difference would shrink if my truck was equipped with the same type of pedal actuated brake controller. I have about 2000 miles of 300C towing so far, and it has been wonderful…. I would put this combo up against any truck/SUV, (particularly in evasive maneuvers).

I have not installed the extra friction sway control you sold me because the break-away switch is mounted on the side of the trailer tongue, right where the ball plate needs to be mounted. I’ll eventually relocate that switch so that I can put it on, but sway is pretty much non-existent, and a single friction control seems to be plenty enough.

Thanks for the insight on setting up the torsion bars on the hitch – this is probably one of the most important adjustments that can be made.  I followed your instructions and added a few bolts about 100 miles into our trip.  This is definitely something I used to overlook, (simply because I didn’t know any better), but it has a profound effect on handling. When I have it set just right, the trailer and car feel like one unit (does that make any sense? It is kind of hard to describe).

I guess my only complaint is that I wish the ball was a little higher, because my trailer sits nose low…. not a problem other that it looks bad (more ammo for the pro truck crowd who think the trailer is sagging because the car cant hold up the weight, which we know is FALSE).

The most difficult thing I’ve had to deal with thus far was getting back into the US (customs) and having to explain why I drove 8 hours to Canada to have a hitch receiver installed. “You mean to tell me that no one in West Virginia installs trailer hitches?” I replied, “Well sir, they do, but not like this one”…. he kneels and looks under the car, comes back up and says “yeah, you got that right, someone did a helluva job on this one, but why would you want to tow anything with this beautiful car?”

Now that’s the million dollar question. I still ask myself why I pay $650 a month for a luxury car that I’m torturing with 7000lbs of trailer. Of course it’s not really an issue considering that we got 12mpg overall, and we still felt like camping when we got to New Hampshire, since all of our vertebrae were still intact (unlike riding in GOLIATH, my faithful, but wasteful  ¾ ton pickup).

Last week, I passed a family travelling on the 401 near London. They were towing a 28’ conventional travel trailer with a crew cab short box truck. Rolling along at 110 KPH their trailer was swaying rhythmically back and forth, using the full width of the lane. When I got up beside them I expected to see a badly adjusted equalizing hitch, but instead they were towing with just a ball – there was no weight distribution and no sway control. The kids were sitting in the back seat, watching a movie, and the driver seemed to be totally oblivious to the trailer sway that everyone else on the highway could see. He did not have extension mirrors, so he could not see down the sides of the trailer. Since he likely did not feel much from the trailer, he probably thought that everything was fine, but if he had to make a sudden lane change, or even if he went into a turn too fast, it would have been very easy for him to loose control of the rig and due to the high centre of gravity of both the truck and trailer, it could roll over fairly easily. I guess ignorance is bliss, but only until the unexpected happens.

Just because you may not “feel” your trailer as you roll down the highway, it does not necessarily mean that your tow vehicle / trailer combination is as safe as it could be. Proper selection of a weight distributing hitch is essential for safety and control at highway speeds. At a bare minimum make sure that your hitch ball is as close to the bumper as possible, and adjust the hitch so that your torsion bars are transferring weight to the front wheels; use a good quality sway control on most trailers, and use two sway control units on trailers over 25’ long. If you have any doubts about your hitch equipment or adjustment, any RV dealer would be more than happy to check your rig for you, and help you bring it up to its peak towing capability.

I hope this helps you set up your tow vehicle / trailer combination – feel free to send an e-mail if you have comments or questions.

Las Vegas, Miracle in the Desert