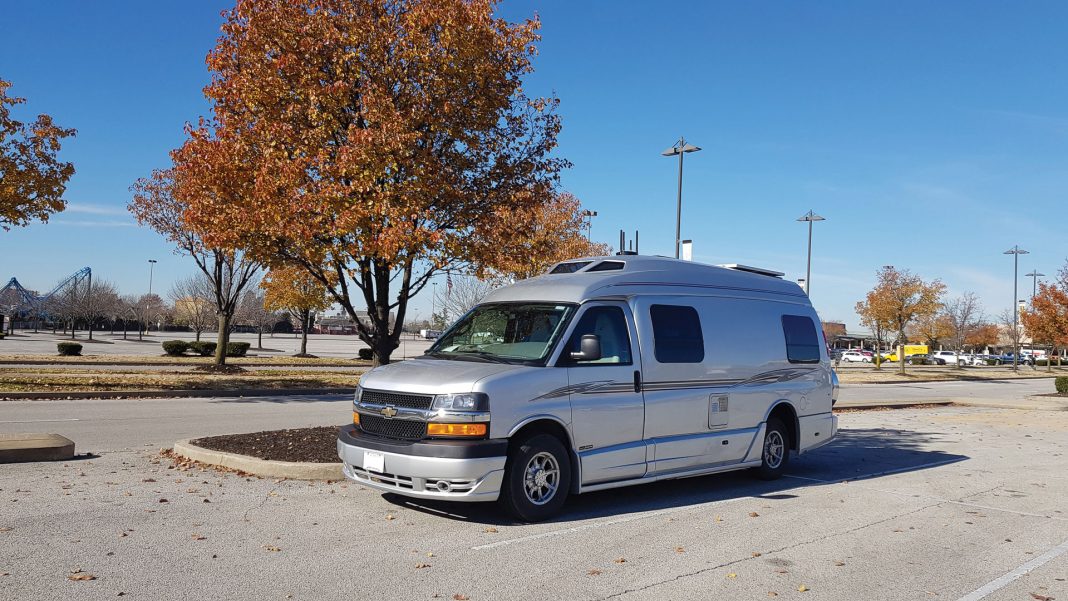 An all-around touring solution for the family on the go!

Roadtrek, now part of The Erwin Hymer Group North America Inc., has been the producer of one of North America’s top-selling Class B motorhomes for many years. Their ‘Popular’ series has been a favourite with consumers who want a classy looking, comfortable B Class motorhome. Since 2016, Roadtrek has been owned by The Erwin Hymer Group, and there has been concern that Roadtrek might vanish into the big company. It doesn’t look like this is going to happen. Roadtrek has appeared big at the Elkhart Open House, and at the Louisville Trade Show where their display size was immense.

The Popular 210, at 22 feet is the longest of the Popular series and is well matched to the Chev Express 3500 chassis. Since this chassis is likely at the end of its production life, it will be interesting to see what is down the road for Roadtrek and Chevrolet.

The Popular 210 is powered by a Vortec 6.0 litre V-8 whose 341 h.p. engine and 373 lb-ft. of torque nimbly lifted the motorhome up the steep grades as we crossed from Louisville to Harrisburg, PA. The power is transmitted to the road with an automatic 6-speed transmission. During a little under 2000 miles, it averaged 18.14 mpg (CDN gallon or 7.7km/l).

The load capacity is 1450 lb, and if you want to tow something, there is a 1000 lb hitch weight, and a tow load of 7650 lb, which is quite respectable and more than many Class A motorhomes.

We drove the motorhome for six days during which we encountered 3 days of heavy winds, drove it in downtown Louisville, and later, on extremely hilly, crooked highways. We were impressed with the stability through all of this. The rear wheel drive no doubt contributed, and not having a front wheel drive we won’t likely find ourselves stuck somewhere on a slight slope with wet grass. Unlike the rear wheel drive Winnebago Paseo on a Ford Transit chassis, the Popular 210 does not have rear duals, yet was solid on the road, and the ride was impeccable. After two decades of driving Class A motorhomes, it was a real treat to drive this rig. It was quiet, conversation was easy between us, and wind and crooked roads did not cause any white-knuckled driving.

The Popular series looks a bit different when compared to other Class B’s. Roadtrek has built the body from the cab rearward, gradually widening it as you move back for more room inside. The entire profile is lower, avoiding the tall, skinny box look. Of course, the windows in the rear doors enabled us to use the interior mirror, as well as the side mirrors to keep track of the traffic.

The sliding door on the passenger side is replaced with a single-entry door which leads directly inside without passing around the end of a cupboard as in some Class B’s. There are individual sets of windows at strategic locations that provide good interior lighting, without the appearance of a long black row of windows on each side. The result is a handsome vehicle that does not entirely look like a van. On three separate occasions, passersby stopped to comment on the vehicle. At the Louisville show, someone in a passing vehicle stopped and came to us, to comment favourably on it.

Your driving position is excellent and comfort is enhanced by the two front chairs, which swivel to face the living area of the RV. On each chair, there is an attractive emblem in red. I would like the convex mirror on the passenger side to be larger as it is often difficult to see vehicles coming up alongside.

The optional navigation system is placed too low for my liking. A second problem occurred with the database. It was unable to put in the address to my home. It said it didn’t exist, although their map showed it. After several telephone calls over three weeks, someone determined that if I put in the township that I lived in, and not the post office, it would work. Yet no one can tell me how to get to the right people to get it fixed. I’m simply told that this is the latest software. My several years old Garmin gets it right, and unlike with GM, there is no charge for updated mapping. I’m now using the Garmin which also shows the speed limit on its screen and can be placed in a safe viewable location.

As you would expect for a B Class, space is at a premium, but the layout is good, and headroom is fair at 6’2.” The centre aisle is open so your view to the rear reveals a nice couch across the rear of the van, with two seats along the sides, and a table between them. With a flick of a switch, the couch flattens out to create the far end of the bed. The side seats are connected to the couch to provide separate beds that are comfortably wide. A flat piece of plywood can be used to fill in the space between the two seats to create a king-size bed. Full-size beds create problems for the less agile people. If you sleep lengthwise, then how do you get into the bed, and if you sleep sideways, someone has to crawl over the other person to get out for nightly toilet visits.

Next comes the two-burner gas stove, and the sink. For more counter space, the stove and sink have lids that cover them up. This sink has a gooseneck that bends down into the sink, and the faucet has a large handle for turning on and off. Across the top, there are handy cupboards, and also under the sink and stove.

There is a table that pulls out in a convenient position to be used by those in the front chairs, which swivel around, and for someone in the one rear passenger seat. If you want to leave the bed down, eating up front is handy. This is especially convenient when traveling across country.

Facing the stove across the aisle is the bathroom. It is small! The double doors are curved to give you more room, but it would be handier if the sink folded up against the wall, and if there was no cupboard below it. The toilet paper holder is fastened to the door, and since it is a vertical prong, it manages to bury itself in your clothes as you attempt to sit down.

Being that this is a compact Class-B RV, the wet bathroom shower takes some getting used to, and Roadtrek designers created a shower curtain track that extends into the aisle. Below, there is a large shower pan and a drain. It’s important to remove the plug in the pan before showering! Hot water is supplied by propane hot water tank with winter bypass.

Above the cab, there is a small ledge with limited storage, and it’s necessary to stoop when heading forward to sit down. An optional single bed can be placed on the seats. 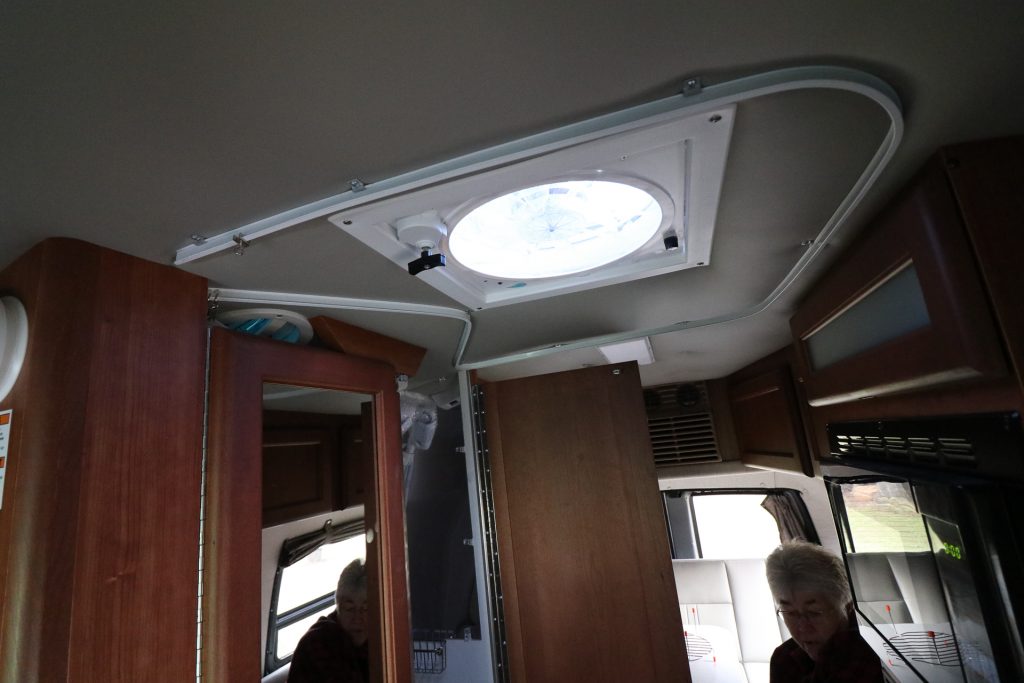 There are covers for the cab windows at night, but instead, we used a drop curtain fastened across the RV just behind the cab. This was quicker, simpler, and kept the heat in the living area. Heat is provided by a propane heater whose noisy fan would benefit from a two-speed switch.

This motorhome has a heat pump built into the upper body and not on the roof. It’s capable of cooling, and heating until outside temperature reaches freezing. It does use up storage space, but the reward is a sleeker overall appearance for the motorhome.

Above the couch is a TV and an entertainment system. Pull down curtains close off the windows, but a darker material would keep out more of the light.

It’s amazing how they used every space possible for storage. With some redesign to protect some components, both under seat areas could also be used for placing sheets or blankets. 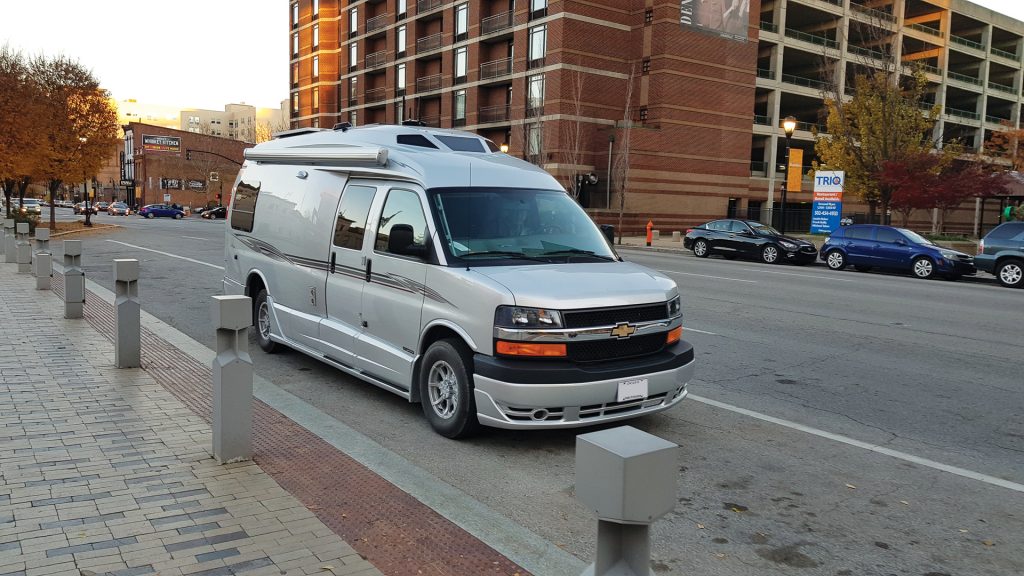 Roadtrek’s sleekly designed Popular sports the trade brand 3 skylight windows up front. When inside covers are on these, a star-like effect is visible. At the rear is a tire carrier which lowers horizontally to allow opening of the left rear door, and also can be used as a table. If you are not using the king bed extension plywood, use it for a table top. Water and 30-amp electrical access are found in a small rear compartment on the driver’s side, and forward of this is a great, long bin that can hold your small barbeque, RV antifreeze, and several other items. Here also you will find the hose to the macerator that this RV uses to dump the tanks. Under the driver’s side is a freshwater tank, and smaller one is located inside under the bed by the TV.

Inside the rear doors, there is room under the couch for a couple of lawn chairs and a folding table. Below the floor is a compartment for smaller items.

The Roadtrek Popular 210 we were using had an optional EcoTrek 400-watt lithium power module and a 3500-watt under-hood charging system. This avoids the noisy and trouble-prone generators normally associated with RVs. If it’s necessary to charge a battery in a campground or boondocking site, an idling vehicle engine will be a lot quieter. Its 2500-watt inverter worked smoothly as we used the 1800-watt convection oven to cook a pizza, using only the batteries. The RV also has the VoltStart system for automatically starting the engine to charge depleted batteries if you are away from the coach. On the roof are 200 watts of solar power, with room for more solar panels. With an electric refrigerator, this could be useful.

While the Roadtrek Popular 210 isn’t designed for camping in below freezing weather, it excels as a touring van all year long, and in spring, summer and fall. The only limitations to cold weather camping adventures come from the use of a small water tank, pump, and pipes that are inside – but all drainage goes below the floor where it is not insulated. It can be used during the winter months as a “dry camper” and you can use the water system if you put plenty of RV antifreeze into those tanks as you use them.

The handy size of the Roadtrek Popular 210 means it can be used at home as an extra vehicle, and if the rear couch is down, it’s a handy place to carry packages. Take off the panel under the couch, and long items can be slid inside along the floor from the back door. That’s nice if you’ve only got a small car at home.

I found this an incredibly easy rig to drive, even in downtown Louisville traffic it was fine, and most normal parking spots sufficed. On the highway, it was great. Roadtrek engineers have produced a functional, good-looking vehicle that handles perfectly. What more can you ask for? 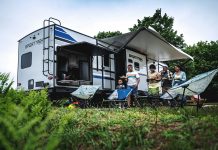 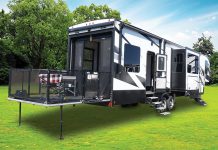 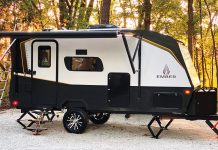